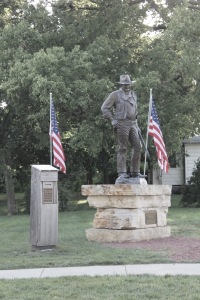 It’s the birthday of John Wayne, born Marion Morrison in Winterset, Iowa, in 1907. He grew up in Southern California and earned his famous nickname, “Duke,” as a child; he was never seen without his Airedale dog, Duke, and people began calling him “Little Duke.” He liked the name better than Marion, and it stuck. His first on-screen film credit was as “Duke Morrison.”

He broke into the film business via the prop department, as a scenery mover, and befriended director John Ford, who started giving him bit parts in his movies. His first starring role came courtesy of Raoul Walsh, and his screen name came from a discussion between Walsh and a studio executive; Duke wasn’t even there when the decision to call him “John Wayne” was made, and never could get used to the name “John.” Walsh cast him as the lead in The Big Trail (1930), but it was in Ford’s Stagecoach (1939) that he became a star. His 50-year relationship with Ford produced some of his best work: including the “cavalry series” of Fort Apache (1948), She Wore a Yellow Ribbon (1949), and Rio Grande (1950), and Ford’s post-war – and more disillusioned – films The Searchers (1956) and The Man Who Shot Liberty Valance (1962). Their personal views on politics grew further and further apart, especially during the McCarthy era – Wayne supported the House Un-American Activities Committee, and Ford spoke out against it – and the friends had to agree to disagree and leave it out of their conversations.

With director Howard Hawks, he made Rio Bravo (1959), prompted by his and Hawks’ outrage over High Noon (1952). Both men felt High Noon was un-American and its characters cowards, so they retold the story of a town under siege by outlaws in a way that was more to their liking. It proved so popular that they remade it twice: as El Dorado (1967) and Rio Lobo (1970).

It’s widely reported that the Republican Party approached Wayne in 1968 to try to convince him to run for president. He declined, scoffing that voters would never put an actor in the White House. He gave a controversial interview to Playboy in 1971, saying, among other things, “Our so-called stealing of this country was just a question of survival. There were great numbers of people who needed new land, and the Indians were selfishly trying to keep it for themselves,” and “I believe in white supremacy until blacks are educated to a point of responsibility. I don’t believe in giving authority and positions of leadership to irresponsible people.” The article also yielded his epitaph, after he died of stomach cancer in 1979: “Tomorrow is the most important thing in life. Comes into us at midnight very clean. It’s perfect when it arrives and it puts itself into our hands. It hopes we’ve learned something from yesterday.”