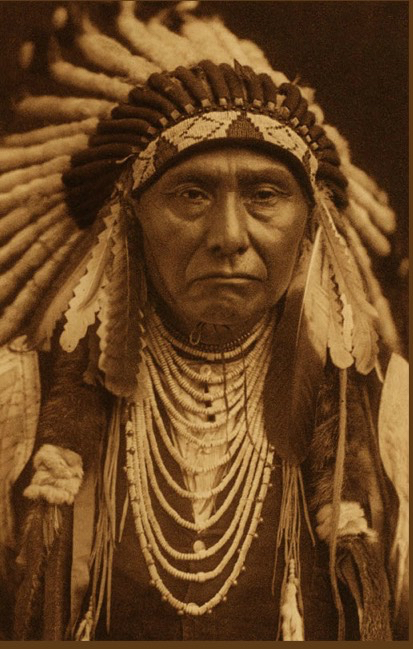 On this date in 1877, Chief Joseph surrendered to the United States Cavalry.

He was the leader of a band of Nez Perce Indians in the Wallowa Valley in northeastern Oregon, and they had been ordered by the United States government to move to a small reservation in Idaho. Joseph resisted, and for a time it seemed he’d been successful, since the government issued a federal order to remove white settlers from the Nez Perce lands, in support of their original treaty. Four years later, the government reversed its decision and backed up the reversal with the threat of a cavalry attack. Joseph wasn’t a war chief, and he believed there was no point in resisting in any case; he reluctantly set out with about 700 followers – fewer than 200 of them warriors – for the Idaho reservation. A band of young men retaliated against the orders by attacking a white settlement, killing several people, and Joseph and his band were forced to flee from the pursuing Army. Though the warriors were outnumbered 10 to one by U.S. soldiers, they defended themselves during several battles for three months and over a thousand miles, through Oregon, Washington, Idaho, and Montana. Joseph tried to lead them to Canada, but they were finally trapped in the Bears Paw Mountains of Montana, only 40 miles from the border. They fought the Army for five days, but eventually Joseph surrendered.

He was known to be an eloquent speaker, and an Army lieutenant on the scene reportedly transcribed his surrender address. In it, Joseph said: “I am tired of fighting. […] It is cold, and we have no blankets. The little children are freezing to death. My people, some of them, have run away to the hills, and have no blankets, no food. No one knows where they are – perhaps freezing to death. I want to have time to look for my children and see how many of them I can find. Maybe I shall find them among the dead. Hear me, my chiefs! I am tired. My heart is sick and sad. From where the sun now stands I will fight no more forever.”