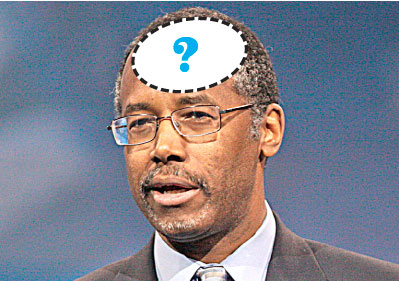 Bethany Karn is a designer and writer living in Takoma Park, Md.

I spoke to Dr. Ben Carson this month. Well, actually, his warm, self-assured voice spoke to me, in a campaign robo-call, to tell me everything he is eager to do for the country. I was surprised; I don’t get many fundraising calls from Republicans, living as I do in the deep-blue suburbs of Washington. I wondered if he remembered me: the woman in the hallway outside the operating room at Johns Hopkins Hospital, the one who grabbed his hands and kissed them when he told me the tumor was removed and my 10-year-old daughter would be just fine.

But that probably happened to him a lot, with so many parents eternally grateful for his gifted hands and his lifesaving medical talents. On his recorded call, he promised to turn his talents toward what ails the United States; from saving the economy to stopping terrorists and — “for heaven’s sake!” — repealing “Obamacare so you can make your own health-care choices.”

I’m glad he called. I’ve wanted to talk to him about exactly this for eight years. Because Ben Carson the doctor saved my daughter’s life, but now I worry that Ben Carson the president could put others’ lives in jeopardy.

In March 2007, after weeks of double vision and massive headaches, my daughter was diagnosed with a juvenile pilocytic astrocytoma tumor the size of a golf ball, lodged in her brain and pressing on her optic nerves. Through a contact who knew a major donor to Johns Hopkins University and who made calls on our behalf, we got in to see Carson, one of the best brain surgeons in the world. We’d won the medical lottery. I was stunned then, as I remain today, at our incredible luck.

[The surgery that made Ben Carson famous]

From the moment Carson walked in and filled the exam room with his magnetic aura of calm confidence, my heart rate slowed, and for the first time in days, I felt everything was going to be okay. He answered our questions and made the surgery sound like a lovely walk in the park.

When he shook our hands and turned to go, I fumbled for another question, anything so he would stay with us another minute longer. I needed to keep breathing in his optimism. I landed on a question that I struggled to articulate: “What about the insurance . . .” I began.

He chuckled kindly to reassure me: “Oh, c’mon now. Don’t you worry about that!”

This was before the Affordable Care Act. I didn’t have terms like “preexisting conditions” on the tip of my tongue to communicate the vague, nagging concern I felt about whether she could get insurance in the future with this medical history. “No, what about later in life, when she’s older?” Carson just put his hand on my shoulder. It was clear, I think, to both of us that I was just babbling. I let the question go. Why on Earth, I scolded myself at the time, would I want this world-renowned surgeon to entertain my naive questions about insurance?

Now that he’s a leader in the GOP presidential campaign, though, I do expect Carson to know how access to health insurance affects his patients — and all patients. Like most of the Republican field, hepromises to repeal the Affordable Care Act. But Carson has outdone the others, calling it “the worst thing that has happened in this nation since slavery.” Nonetheless, he wants to keep the ban on insurance companies refusing coverage for patients with preexisting conditions.

“I think the banning of people being turned away from health insurance because of pre-existing conditions is one of the very few bright spots in an otherwise horribly written law,” he wrote on his Facebook page in response to a supporter’s question. “Providing coverage to people who are sick is extremely important. When I work with Congress to repeal the law, I think we should keep this protection for the sick.”

I should be reassured, right? My exam-room question finally answered, all these years later. Except that this plan to protect the popular preexisting-condition protections while repealing Obamacare’s unpopular individual mandate is a political promise Carson just can’t keep.

Most health-care economists believe that the individual mandate, which requires Americans to carry insurance, is necessary to cover the cost of insuring people with preexisting conditions. Insurance companies can’t afford the risk of covering people who might need expensive care if they don’t also have a lot of healthy clients on their rolls to balance out the big payouts — such as for brain surgery and MRI check-ups. “The bottom line is that we can’t have fairly priced insurance for the healthy and the sick alike without the broad participation that is guaranteed by the mandate,” wrote Jonathan Gruber, a former Obama administration adviser on health care, in 2012.

As we prepared my daughter for brain surgery eight years ago, Carson was right to tell me not to worry about insurance. No one should worry about cost when a child’s life is on the line. Indeed, that was the whole point of the ACA, which Carson and his rivals pledge to undo.

Because parents do worry. It gnaws away at them even when, like we do, they have impeccable health-care coverage. They worry because luck is slippery; tumors can, and do, grow back, and parents lose their jobs and insurance. Bankruptcy looms in the hallways of every emergency room in the country.

But it shouldn’t be about luck.

My daughter is 19 now and healthy. Under President Carson, would she have the same protections as an adult that she was fortunate to have as a child? Probably not. If the ACA were repealed, she wouldn’t be able to stay on our employer-backed insurance through her 26th birthday. We would probably forgo her biannual MRIs if we had to pay the full cost while also paying for college. With the repeal of the mandate, insurance for someone with her medical history would be pricey for an entry-level adult — if available at all.

If the ACA were repealed, our national health-care policy would again be based on the medical lottery.

If Carson could have actually heard me on that robo-call, I’d have loved the opportunity to finish my question from years back: “What if insurance doesn’t cover her preexisting condition? What are you going to do, ‘for heaven’s sake,’ to make sure luck — good or bad — does not make her health-care choices for her?”

But more than anything, if I had him on the phone today, I would remind Carson that we still, to this day, thank God for sending him to us. And we also thank God for Obamacare.

One thought on “Ben Carson the president might put others’ in jeopardy.”