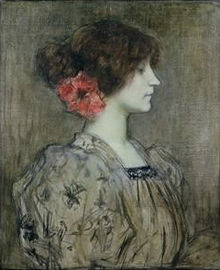 as 67 years old at the fall of France, and remained in Paris, in her apartment in the Palais Royal. Her husband Maurice Goudeket, a Jew, was arrested by the Gestapo in December 1941, and although he was released after a few months through the intervention of the French wife of the German ambassador, Colette lived through the rest of the war years with the anxiety of a possible second arrest. During the Occupation she produced two volumes of memoirs, Journal à rebours (1941) and De ma fenêtre (1942 – the two issued in English in 1975 as Looking Backwards).

In 1944 she published what became perhaps her most famous work, Gigi, telling the story of sixteen year old Gilberte (“Gigi”) Alvar. Born into a family of demimondaines, Gigi is being trained as a courtesan to captivate a wealthy lover, but breaks with tradition by marrying him instead  In 1949 it was made into a French film starring Danièle Delorme and Gaby Morlay, then in 1951 adapted for the stage with the then-unknown Audrey Hepburn in the title role, picked by Colette personally; the 1958 Hollywood musical, starring Leslie Caron and Louis Jourdan, with a screenplay by Alan Jay Lerner and a score by Lerner and Frederick Loewe, won the Academy Award for Best Picture.

In the postwar years, she became a famous public figure, crippled by arthritis and cared for by Goudeket who supervised the preparation of her collected works, or Oeuvres completes (1948-1950). She continued to write during these years, bringing out L’Etoile vesper (1944) and Le fanal bleu (1949), in which she reflected on the problems of a writer whose inspiration is primarily autobiographical. On her death on August 3, 1954, she was refused a religious funeral by the Catholic Church on account of her divorces, but was given a state funeral, the first French woman of letters to be granted this honour, and interred in Père-Lachaise cemetery.

She was named for her mother, Sidonie, so she went by Gabri. She grew up in the countryside, exploring the woods and hills around her home, making friends with animals. She wore wooden clogs to school and carried a metal box of coals to keep warm. She ate simple food, but she delighted in more gourmet meals. She wrote: “Where did I get my violent passion for rustic wedding-breakfasts? What ancestor bequeathed to me, via my frugal parents, a positively religious fervor for stewed rabbit, leg of mutton with garlic, soft-boiled eggs in red wine, all served between barn walls draped with buff sheets decorated with branches of red June roses?”

Colette grew into a beautiful young woman. She was strong and athletic, and she always wore her hair in a long red braid. She was witty, forward, and down-to-earth. The Parisian gentleman Henry Gauthier-Villars spent quite a bit of time with Colette’s family, and when she was 20, he asked her to marry him. Gauthier-Villars was attractive, sophisticated, and a well-known writer. He went by “Willy” – it was one of his pseudonyms – and he is the one who changed his new wife’s name from “Gabri” to “Colette.”

Colette said later: “My God! How young I was and how I loved that man!” But their marriage was tense from the start – Willy didn’t earn much writing witty newspaper columns, and Colette earned nothing and on top of that wasn’t much of a housekeeper. Willy also earned money by employing hacks to write books for him, which he published under his own name. It occurred to him that since his new wife was such a good storyteller, he might as well get her to help pay the bills. So Colette wrote four novels based on her life as a girl growing up in the French countryside, but they were all published under the name “Willy”: Claudine à l’école (1900, Claudine at School); Claudine à Paris (1901, Claudine in Paris); Claudine en ménage (1902, Claudine Married); and Claudine s’en va (1903, Claudine and Annie ). They were hugely successful, in large part due to Willy’s talent at self-promotion.

Colette felt like a forced laborer – sometimes her husband locked her up in a room and demanded a certain number of pages before he would let her out. But the books helped the couple financially, and she capitalized on their success. After Claudine was made into a play, it became a cultural sensation – the name Claudine was given to pastries, soap, cigarettes, and ice cream. Colette took mime classes, and installed a trapeze and parallel bars above her apartment. She was friends with everyone from Marcel Proust to cabaret dancers. She later dramatized the scene in which she met the young Proust: “He contemplated me with his long-lashed, caressing eyes and murmured, for the two of us: ‘Ah, yours is the daydream of the child Narcissus; it’s his soul, filled with sensuality and bitterness …’ ‘Monsieur,’ I tell him firmly, ‘you’re delirious. My soul is filled with nothing but red beans and bacon rinds.'”

Eventually, she left Willy and joined the theater. She was an actress, a dancer, and a mime. She caused and uproar when she and her lover, a woman named Missy, acted out a scene at the Moulin-Rouge in which Colette was a mummy and Missy was an archaeologist who stripped her of her bandages and then kissed her. She married the editor of the newspaper Le Matin, then had an affair with her stepson, which she dramatized in her novel Chéri (1920) – although she toned it down by making the main characters an older woman and a young, inexperienced man. She wrote 50 novels, including Gigi (1944), which was made into a Broadway play and a film.

Colette died in 1954, and she was the first woman in the history of France to be given a state funeral – although she was denied a Catholic burial. There were 2,500 guests invited to the funeral, and 6,000 more turned up to visit her casket and cover it in flowers. The French flag was laid on her coffin, along with wreaths sent by everyone from the French government to the Queen of Belgium to her fellow performers from the music hall.

When a friend needed help starting a business, Colette wrote to her: “How many times have I been ready to tell you: make use of me … my physical solidity, my good head, which isn’t crazy, my desire for work, my good old bourgeois work ethic, which compels me to succeed at whatever task is entrusted to me.”

She said, “To be astonished is one of the surest ways of not growing old too quickly.”