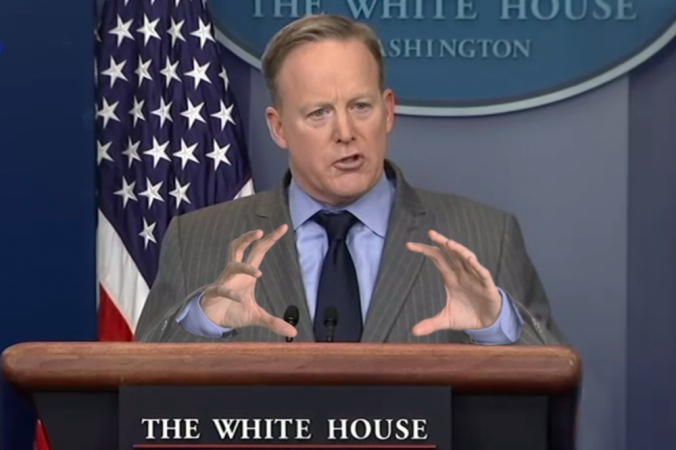 Washington D.C. (dpo) – We knew Donald Trump wanted to go big, after all, ‘making America great again’ is no small task. Now, it seems he has delivered. The new White House Press Secretary Sean Spicer announced today to the gathered reporters of Washington, D.C., that the new President’s first official bowel movement was twice the size of Obama’s in 2009.
Although White House claims on the size of the crowd at Mr. Trump’s inauguration are disputed, in this case, the facts appear to be clear.
“It is only his first full working day in office and the President has already created the right atmosphere for his time in office.” Spicer’s voice trembled as he reported, “Mr. Trump’s first presidential bowel movement measured twice the volume of that recorded by his predecessor, Barack Obama. Period! Nothing to discuss.”

Several White House employees, including Spicer himself, were witnesses to Mr. Trump’s almost superhuman achievement. Unfortunately however, there is no photographic evidence of President Trump’s ‘first official doody’.
“With greatest respect to the 44 Presidents before him, we are convinced that this is the most magnificent pile of faeces ever deposited in the White House.”
Concluding the press conference, Mr. Spicer explicitly warned the journalists in attendance not to diminish or disparage Mr Trump’s achievements in the area of human waste excretion. “I know you folk in the media have sworn to make the President look ridiculous at every opportunity”, he explained, “so it’s lucky I’m here to take care of that.”