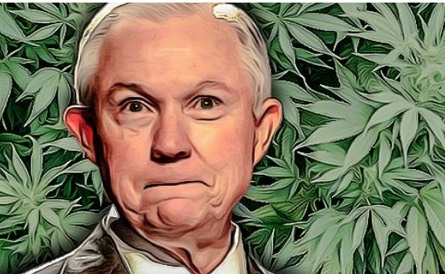 (ANTIMEDIA) It seems Attorney General Jeff Sessions’ former comments claiming the enforcement of federal marijuana rules is a “strain on federal resources” have been completely forgotten. The former Alabama senator showed his true colors on this issue during a recent exchange with reporters, and we now know his office is “going to look” at cases in some states of people violating local marijuana rules. After all, he told journalists, “[s]tates they can pass the laws they choose … [but] it does remain a violation of federal law to distribute marijuana throughout any place in the United States, whether a state legalizes it or not.”

Worse than ignoring states’ rights by asserting the federal government might intervene in certain cases is Sessions’ claim that marijuana has been inviting more violence.

Unfortunately for the attorney general, this is nothing but a bogus claim.

In Colorado, crime has been dropping considerably ever since the state passed recreational marijuana laws, with homicides dropping 12.8 percent in the first year of legal pot. Other studies suggest that while Sessions believes marijuana legalization is associated with more crime, attempting to make this case is nearly impossible. According to a 2014 study, “findings run counter to arguments suggesting the legalization of marijuana for medical purposes poses a danger to public health in terms of exposure to violent crime and property crimes.”

But even if in an alternative universe the legalization of weed had, indeed, led to higher crime rates. What’s at stake, in this case, is not public safety or even health for that matter. The essence of prohibitionist policies has nothing to do with safety. Instead, these policies are here to restrict personal freedoms.

Like similar prohibitionist rules, marijuana criminalization is about control of what one does with one’s body. Not about safety or health.

“The Nixon campaign in 1968, and the Nixon White House after that, had two enemies: the antiwar left and black people,” former Nixon domestic policy chief John Ehrlichman famously admitted years later, explaining the war on drugs was never meant to boost domestic security.

“You understand what I’m saying? We knew we couldn’t make it illegal to be either against the war or black, but by getting the public to associate the hippies with marijuana and blacks with heroin. And then criminalizing both heavily, we could disrupt those communities.”

Controlling groups of people who fail to go along with government policy has always been a political aim of people in power — whether Democrat or Republican. Tools put in place to criminalize certain behavior help any administration to keep groups of people from persuading others to follow along. And what better tool to accomplish that than to use the power of the law to crush dissent?

Winning the war on drugs doesn’t mean anything to those writing the legislation. In the end, the public safety rhetoric is nothing but hot air. But to those living under these immoral rules, reminding the wider public that the war on pot is a war on the sovereignty of the individual and his right to self-ownership is what is going to turn the public’s attention to what really matters.

What’s at stake is not people’s health or their right to choose what poison they use but what makes us human: our right to make our own decisions.