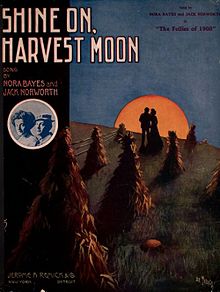 “Shine on, Harvest Moon” is a popular early-1900s song credited to the married vaudeville team Nora Bayes and Jack Norworth. It was one of a series of Moon-related Tin Pan Alley songs of the era. The song was debuted by Bayes and Norworth in the Ziegfeld Follies of 1908 to great acclaim. It became a pop standard and continues to be performed and recorded even in the 21st century.

During the vaudeville era, songs were often sold outright, and the purchaser would be credited as the songwriter. John Kenrick‘s Who’s Who In Musicals credits the song’s actual writers as Edward Madden and Gus Edwards. However, David Ewen’s All the Years of American Popular Music credits Dave Stamper, who contributed songs to 21 editions of the Ziegfeld Follies and was Bayes’ pianist from 1903 to 1908.[1] Vaudeville comic Eddie Cantor also credited Stamper in his 1934 book Ziegfeld – The Great Glorifier.[2]

To hear the original 1908 recording from Edison Recordings click the link below.

The night was mighty dark so you could hardly see,
For the moon refused to shine.
Couple sitting underneath a willow tree,
For love they did pine.
Little maid was kinda ‘fraid of darkness
So she said, “I guess I’ll go.”
Boy began to sigh, looked up at the sky,
And told the moon his little tale of woe

Note: The months in the chorus have been sung in different orders.

The Ada Jones and Billy Murray recording linked on this article has it as April, January, Ju-u-une or July. [4]

I can’t see why a boy should sigh when by his side
Is the girl he loves so true,
All he has to say is: “Won’t you be my bride,
For I love you?
I can’t see why I’m telling you this secret,
When I know that you can guess.”
Harvest moon will smile,
Shine on all the while,
If the little girl should answer “yes.”

Originally issued on Perfect 12737. This song was first introduced by Nora Bayes and songwriter-husband, Jack Norworth in the Ziegfeld Follies of 1908. Ruth Etting’s performance of the song in the Ziegfeld Follies of 1931 was a tribute to Nora Bayes. The 1931 production of the Follies was the last to be produced under the direction Florenz Ziegfeld, Jr.; he died shortly thereafter in 1932. It’s interesting to note that Nora Bayes recorded this song for Victor in 1910 but it was never released. “Oh, shine on, shine on, harvest moon up in the sky, I ain’t had no lovin’ since April, January, June, or July. Snow time ain’t no time to stay outdoors and spoon, So shine on, shine on, harvest moon, For me and my gal.”

Traditionally, this designation goes to the full moon that occurs closest to the Autumnal (fall) Equinox. In the northern hemisphere the Harvest Moon usually comes in September, and this year (2016) it will fall on the night of September 16-17. At the peak of the harvest, farmers can work into the night by the light of this moon. Usually the full Moon rises an average of 50 minutes later each night, but for the few nights around the Harvest Moon, the moon seems to rise at nearly the same time each night: just 25 to 30 minutes later across the U.S., and only 10 to 20 minutes later for much of Canada and Europe. Corn, pumpkins, squash, beans, and wild rice — the chief Indian staples — are now ready for gathering.